Native son Matt Coleman was born and raised in Henderson, graduating from Silverado High School, where his dad served as principal for many years.  Hailing from a family of educators, including teachers and administrators, Coleman took a different path, and Water Street is the beneficiary of his decision to pursue his dreams.

As culinary director of Biscuits and Bourbon, described as a social kitchen, Coleman brings to Water Street everything he learned while amassing a decade of experience in the F&B industry. From Aria on the Las Vegas Strip to Vail, Colorado, a boutique hotel in Michigan and beyond, Coleman studied and mastered several different cuisines that contribute to his culinary brilliance.

A self-described culinary nomad and outdoor adventurer who graduated from Le Cordon Bleu College of Culinary Arts, Coleman puts down serious roots in his hometown and felt the pull to return to Henderson given everything that’s happening both on Water Street and in the valley.

“It wasn’t the lights of Vegas that brought me back,” said Coleman.  “It was the intimate and hip vibe and growing energy on Water Street that spoke to me.  While the Knights and the Raiders were definitely part of the draw, it’s the desire to make Henderson part of the valley’s thriving food scene that landed me here. My excitement and enthusiasm for Water Street can’t be contained.”

Coleman credits his success, in part, to another native son and Water Street enthusiast, Joe Yakubik, who owns and is developing multiple properties on Water Street.  Introduced by his sister to Yakubik, a Basic High School grad and local real estate guru, Coleman teamed up with Yakubik to create the Biscuits and Bourbon concept, and together, they are working on additional food concepts for Water Street, including Street Burger, opening this summer and offering a super cool rooftop deck.

For Biscuits and Bourbon, Coleman thought long and hard about what makes Henderson, well, Henderson. Drawing from his experience smoking meats in Colorado and studying regional varieties of BBQ, Coleman took the best of the best to create his own signature BBQ style that includes generous use of sage, dried chilis in the rub, and special sauces.

“There’s a strong community feel and neighborly backyard vibe here, and our food and our ambiance reflects that,” Coleman said. “Hang out with friends and neighbors while enjoying smoked meats, elevated BBQ, fun cocktails and spirits – boutique style. This is a place where everyone will know your name, your drink of choice and your favorite meal!” 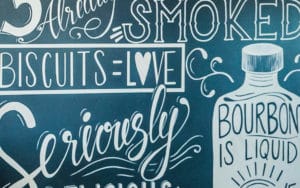 Get social at Biscuits and Bourbon